Blakeslee Arpaia Chapman installs and repairs an extensive range of utility substations that carry power, telecommunications, cable, drainage, sewage, water, steam and chilled water, natural gas, and many other materials for public and private clients. From open trenching to directional boring and microtunneling, all types of construction methods are used to efficiently build networks and structures for a complete job of conduits, junction chambers, manholes, and substations.

The company investigates conditions and plans solutions before starting projects to minimize the exposure of the public and workers to safety issues and inconveniences, and to minimize time onsite. Services are also enhanced by in-house engineering support to quickly resolve complex or unexpected on-site issues and emergency situations. BAC understands the critical importance of keeping these systems up and functioning properly.

We're proud to service the Branford, CT; Bridgeport, CT; and Worcester, MA areas. Call us today to get started! 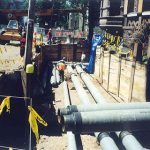 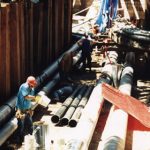 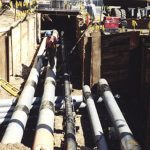 This project, installing 650 linear feet of steam lines and 2,500 linear feet of chilled water lines under York and Chapel streets, was a critical step in Yale University's long-range plan to increase the capacity and reliability of its heating and air conditioning plant.

Before work began, BAC investigated the existing utilities in the street, to facilitate the design of the custom-manufactured pipe.

Vibration damage to nearby buildings and museums was successfully prevented through continuous monitoring and structural reinforcements. Pipe sleeves were jacked 300 feet to avoid existing utilities at a particularly busy intersection where maintaining an open trench was impractical.

While technically an eight-month project, most of the work could begin only after graduation in May and had to be completed prior to classes resuming in August. Although night work was generally not permitted, with efficient coordination and extra crews, the project was completed before the deadline. 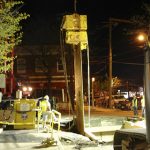 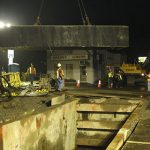 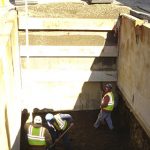 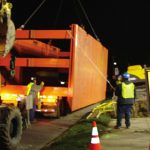 BAC repairs and installs underground electrical duct banks and electrical vaults in city streets and substations, installs grounding wires in substations, and installs and repairs foundations for equipment and towers. As part of the work, we perform all the excavation, installation, concrete, and road repairs needed for a quality final product. 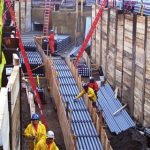 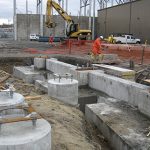 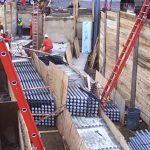 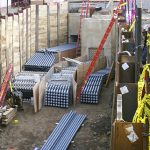 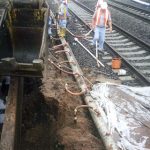 Blakeslee installed a new storm drainage system at the East Cut, New Haven railroad yard. Work was performed while maintaining the busy railroad schedule at Union Station. Because the water table was 6" below the railroad ties, wellpoints were utilized to draw down the water for excavating. Catch basins, manholes, and piping were installed. 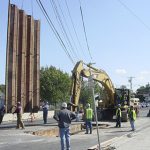 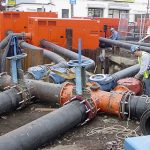 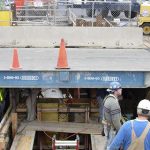 This structure is to divert excess sewage to the five-million-gallon storage tank at times of heavy flow. Then, as the treatment plant can process it, the sewage is gradually introduced back into the system. The diversion structure is under Ella Grasso Boulevard, a heavily travelled street. The project was designed to be completed in stages. BAC devised a plan in which we could restore traffic each night by using Mabey bridges to cover the opening in the street. We were allowed to perform the work in one stage and accelerated the schedule. The project involved tapping into a live six-foot diameter sewer line and installing a mechanical weir that would trip under high flow conditions to divert sewage to the storage tank. The photos show placing sheetpiling under overhead electrical lines, piping to divert the sewage temporarily, and a Mabey bridge covering part of the opening in the street. 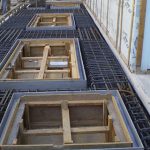 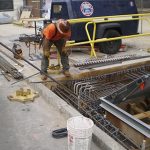 In this unique project, BAC was to rebuild a major electrical distribution vault that is underground, in front of the Shubert Theater. The roof of the vault is the sidewalk for pedestrians on a busy downtown street. The vault is actually a double vault end-to-end, each part 12' wide by 30' long, and the vault is against the basement wall of the theater. Water was leaking into the vault, causing corrosion.

BAC removed the roof/sidewalk and poured a roof in place. The sidewalk/roof has hatchways and ventilation grates in it. We exposed the brickwall of the basement in order to stop the water leaking. Though a transformer in the vault was removed, there were still live wires in the vault as we worked. The walls of the building, above ground level, are glass and so had to be protected. Using temporary traffic and pedestrian detours, the new sidewalk/roof was completed, and the granite curb was reset.